A little retro soundtrack for an imaginary journey... and game! Produced and composed by Andrea Baroni.

Inspired by JRPGs, the music comes straight from the late nineties, from games where the soundtrack was pure General MIDI and not CD-quality audio. A lighthearted, playful and sometimes emotional "coming of age" adventure.

5 SONGS/SECTIONS (each with loopable parts):

Since this music pack/soundtrack is basically free, attribution is required, under the CC-BY-4.0 license. This can be done by mentioning, for example, the song's name and including my name as well (Andrea Baroni). Also, you must include a link to my website (andreabaroni.com) or my itch.io profile.

Any donation of course (that you can do right before downloading the files here) will help me creating more of these free assets!

SUPPORT ME ON PATREON:

And have the option to download and use all of my assets here on itch.io, plus have access to many more assets, updates, and request custom changes.

Also please join my newsletter so to keep in touch and get updates on my releases.

MORE DETAILS ABOUT THE SONGS AND HOW I CREATED THE MUSIC:

The game is inspired by the theme of the jam:
A Journey To Remember
and by this image: 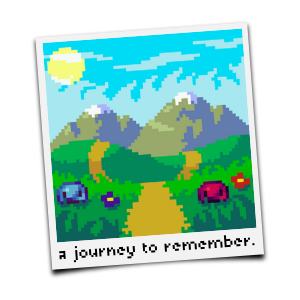 I decided to create the soundtrack for a little JRPG, probably a narrative JRPG, where the story is even more important than the game mechanics or the length of the game itself.

I also decided to make it sound retro, as the graphic from the image suggests. Not the usual 8-bit or 16-bit chiptune though, but instead something that would come straight from the late nineties, something that sounds like Everquest, or a role-playing game where the soundtrack is pure General MIDI and not CD-quality audio (so imagine the sounds coming from a Creative Sound Blaster audio card installed on your amazing Pentium computer :) ).
In my case, all of the sounds are coming from the Roland Sound Canvas VST (see screenshot).

Additionally, I wanted the game (and so the OST) to be lighthearted and playful. It can be emotional and sometimes a bit dark, but overall it should be a colorful and cute game.

1. JOURNEYS AHEAD
The classic title track. Optimistic and adventurous.

2. LEAVING THE MEADOW
Where the protagonist leaves his hometown for the first time in his life. Nostalgic, sweet, optimistic, and fearful at the same time.

3. ACROSS THE DARK MOUNTAINS
This is where things get difficult and where a hero is made.

4. BATTLING TO SAVE A FRIEND
The final battle, where we put all that we have got, all of our levels and inventory, in order to save what matters to us.

5. THERE AND BACK AGAIN
We go back home after we won. Home is not the same. We are not the same, but it's good to be back. 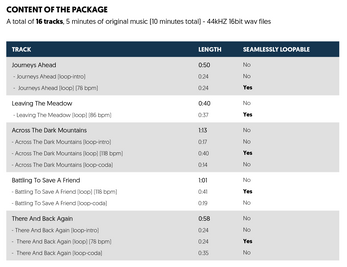 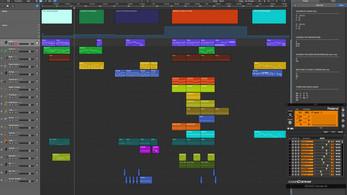